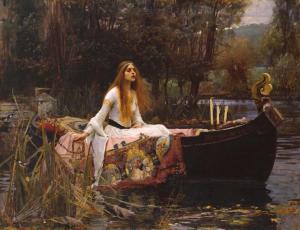 “The Lady of Shalott,” by Alfred, Lord Tennyson

On either side the river lie

Long fields of barley and of rye,

That clothe the wold and meet the sky;

And thro’ the field the road runs by

Tremble in the water chilly

The sunbeam showers break and quiver

In the stream that runneth ever

By the island in the river

Flowing down to Camelot.

Overlook a space of flowers,

And the silent isle imbowers

Underneath the bearded barley,

The reaper, reaping late and early,

Hears her ever chanting cheerly,

O’er the stream of Camelot.

Piling the sheaves in furrows airy,

Beneath the moon, the reaper weary

The little isle is all inrail’d

With roses: by the marge unhail’d

Skimming down to Camelot.

A pearl garland winds her head:

She leaneth on a velvet bed,

No time hath she to sport and play:

A charmed web she weaves alway.

A curse is on her, if she stay

Her weaving, either night or day,

To look down to Camelot.

She knows not what the curse may be;

Therefore no other care hath she,

She lives with little joy or fear.

Over the water, running near,

The sheepbell tinkles in her ear.

Before her hangs a mirror clear,

And as the mazy web she whirls,

She sees the surly village churls,

And the red cloaks of market girls

Sometimes a troop of damsels glad,

An abbot on an ambling pad,

Or long-hair’d page in crimson clad,

Goes by to tower’d Camelot:

And sometimes thro’ the mirror blue

She hath no loyal knight and true,

But in her web she still delights

To weave the mirror’s magic sights,

For often thro’ the silent nights

A funeral, with plumes and lights

And music, came from Camelot:

Or when the moon was overhead

I am half sick of shadows,’ said

A bow-shot from her bower-eaves,

He rode between the barley-sheaves,

And flam’d upon the brazen greaves

A red-cross knight for ever kneel’d

To a lady in his shield,

That sparkled on the yellow field,

Hung in the golden Galaxy.

As he rode down from Camelot:

And from his blazon’d baldric slung

And as he rode his armour rung,

All in the blue unclouded weather

The helmet and the helmet-feather

As he rode down from Camelot.

As often thro’ the purple night,

Below the starry clusters bright,

On burnish’d hooves his war-horse trode;

From underneath his helmet flow’d

His coal-black curls as on he rode,

As he rode down from Camelot.

From the bank and from the river

He flash’d into the crystal mirror,

She made three paces thro’ the room

She saw the water-flower bloom,

She saw the helmet and the plume,

She look’d down to Camelot.

Out flew the web and floated wide;

The mirror crack’d from side to side;

‘The curse is come upon me,’ cried

In the stormy east-wind straining,

The pale yellow woods were waning,

The broad stream in his banks complaining,

Outside the isle a shallow boat

Beneath a willow lay afloat,

Below the carven stern she wrote,

A cloudwhite crown of pearl she dight,

All raimented in snowy white

That loosely flew (her zone in sight

Clasp’d with one blinding diamond bright)

Her wide eyes fix’d on Camelot,

Though the squally east-wind keenly

By the water stood the queenly

With a steady stony glance—

Beholding all his own mischance,

Mute, with a glassy countenance—

She look’d down to Camelot.

It was the closing of the day:

She loos’d the chain, and down she lay;

The broad stream bore her far away,

As when to sailors while they roam,

By creeks and outfalls far from home,

Rising and dropping with the foam,

Blown shoreward; so to Camelot

Still as the boathead wound along

The willowy hills and fields among,

They heard her chanting her deathsong,

Till her eyes were darken’d wholly,

And her smooth face sharpen’d slowly,

For ere she reach’d upon the tide

The first house by the water-side,

Singing in her song she died,

Under tower and balcony,

By garden wall and gallery,

A pale, pale corpse she floated by,

Deadcold, between the houses high,

Knight and burgher, lord and dame,

To the planked wharfage came:

Below the stern they read her name,

They cross’d themselves, their stars they blest,

There lay a parchment on her breast,

That puzzled more than all the rest,

The wellfed wits at Camelot.

‘The web was woven curiously,

The charm is broken utterly,

Draw near and fear not,—this is I,

The Lady of Shalott.’

Bat for Lashes, “Moon and Moon”

And plod upon the earth as dull and void:

Earth’s prison chilled my body with its dram

Of dullness, and my soaring thoughts destroyed.

I fled to solitudes from passion’s dream,

But strife pursued—I only know I am.

I was a being created in the race

Of men, disdaining bounds of place and time,

A spirit that could travel o’er the space

The Magnetic Fields, “I Was Born” 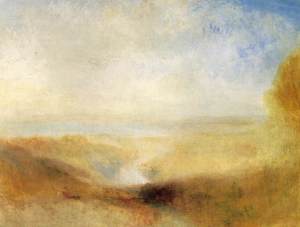 “The River Again and Again,” by Linda Gregg

If we stayed together long enough to see

the seasons return, to see the young animals

and the opening of peonies and summer heat,

then we could make sense of the hawk’s calm

or the deer. I could show you how repetition

helps us to understand the truth.

And we would know one another sometimes

with a love that touches indifference.

In the small beauty of the forest

The wild deer bedding down—

That they are there!

Nuzzle and the alien small teeth

Tear at the grass

The roots of it

Dangle from their mouths

Scattering earth in the strange woods.

They who are there.

Nibbled thru the fields, the leaves that shade them

Hang in the distances

In this in which the wild deer

Startle, and stare out.

Anna Atkins, Papaver rhoeas. Paper watermarked 1845. Cyanotype from the Atkins-Dixon album presented by Anne Dixon to her nephew in 1861.

What are you saying? That you want

eternal life? Are your thoughts really

as compelling as all that? Certainly

you don’t look at us, don’t listen to us,

to you, you staring through

the soul! the soul! Is it enough

only to look inward? Contempt

for humanity is one thing, but why

field, your gaze rising over the clear heads

of the wild buttercups into what? Your poor

of change. Better than earth? How

would you know, who are neither

here nor there, standing in our midst? 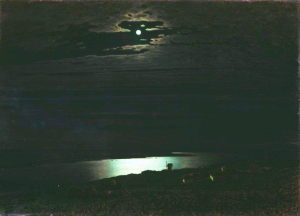 From Blank to Blank—-

If end I gained

I shut my eyes—-and groped as well

Lucinda Williams, “I Envy the Wind” 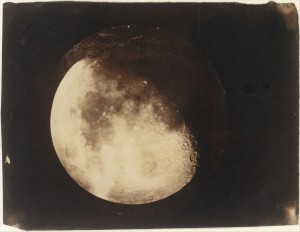 “The Moon and the Yew Tree,” by Sylvia Plath

This is the light of the mind, cold and planetary
The trees of the mind are black. The light is blue.
The grasses unload their griefs on my feet as if I were God
Prickling my ankles and murmuring of their humility
Fumy, spiritous mists inhabit this place.
Separated from my house by a row of headstones.
I simply cannot see where there is to get to.

The moon is no door. It is a face in its own right,
White as a knuckle and terribly upset.
It drags the sea after it like a dark crime; it is quiet
With the O-gape of complete despair. I live here.
Twice on Sunday, the bells startle the sky —
Eight great tongues affirming the Resurrection
At the end, they soberly bong out their names.

The yew tree points up, it has a Gothic shape.
The eyes lift after it and find the moon.
The moon is my mother. She is not sweet like Mary.
Her blue garments unloose small bats and owls.
How I would like to believe in tenderness –
The face of the effigy, gentled by candles,
Bending, on me in particular, its mild eyes.

I have fallen a long way. Clouds are flowering
Blue and mystical over the face of the stars
Inside the church, the saints will all be blue,
Floating on their delicate feet over the cold pews,
Their hands and faces stiff with holiness.
The moon sees nothing of this. She is bald and wild.
And the message of the yew tree is blackness – blackness and silence.

The Waterboys, “The Whole of the Moon“